The City of Miramichi Fire Department maintains a wide variety of fire apparatus to serve the needs of the citizens that we protect.  Future fire apparatus purchases will be planned to facilitate the best level of fire protection credit in future Fire Underwriters Surveys which may result in lower fire insurance premiums for taxpayers.  The types and typical uses of our varied fleet are as follows: 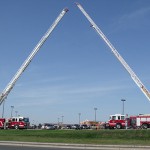 The Fire Department operates 2 Smeal quintuple combination pumpers (a.k.a. quints) with 105′ ladders and aerial master streams.  These essential vehicles offer traditional pumper/engine capabilities with an aerial ladder to effect rescues from elevated portions of buildings and also can be used to fight fire from above. The elevated master streams flow up to 1,250 gallons of water per minute. Both trucks are also fitted to carry foam and each truck seats 6 firefighters including the driver. There is one ‘quint’ either side of the river, Ladder 1 is stationed in the former Town of Newcastle and Ladder 2 is stationed in the Former Town of Chatham.

The Fire Department operates 3 tankers, these are located in the former Town of Chatham, the former Town of Newcastle and the Former Town of Loggieville. Their primary purpose is to supply large volumes of water (usually in excess of 2,000 gallons) to engines and aerial apparatus until a reliable water source is secured, or in the outlying rural areas, these apparatus may shuttle water between a static water source and a portable water tank set up at the emergency scene.

The workhorse of the fire service, engines can be found in every station in the city. Seating arrangements vary from 3 to 6 seats and various combinations of water tanks, foam tanks and fire service ground ladders can be found throughout the City.

The Fire Department operates 2 rescue vehicles, 1 of which does not have any specific firefighting capacity, but can transport 5 or more firefighters and a wide array of rescue equipment for ice rescue, water rescue and also auto extrication. There is a rescue vehicle either side of the river.

The Fire Department primarily operates one Fast Rescue Boat which is of the rigid inflatable hull (RIB) type. This vessel is suited to most boating conditions and carries both rescuers and victims alike. As a reserve boat, the Fire Department also has another boat which is the same type of aluminum vessel that members of the public would use for recreational fishing. This boat has limited capabilities in more inclement weather, or when used in times of significant river swell.