The Canine Section of the Miramichi Police Force presently consists of one Canine German Shepherd ’Chase’ and his dog handler, Constable Scott Smallwood.

Chase is a short haired, 75 lb., sable colored German Shepherd. Chase was born in Miramichi at DOLFTAR Kennels in 2011 and was purchased by the Miramichi Police Force in the early Fall of 2012 when he started his training with Cst. Scott Smallwood. Cst. Smallwood and K-9 Chase attended the Ontario Provincial Police General Dog Service training in the fall of 2012 and returned in the spring of 2013 for the Narcotics Detection training. The K-9 training and re-certification is on-going for the service life of each police dog.

The German Shepherd breed is the preferred canine for this type of work as the dogs are strong, robust, courageous and are capable of performing in extreme conditions. This versatility enables the canine teams to perform a variety of tasks such as tracking, searching for people, locating illegal substances and detecting explosives. It is these capabilities combined with their hardiness, loyalty and psychological effort which provide the qualities required for a police canine. K-9 Units are used to transport both dogs and their handlers. 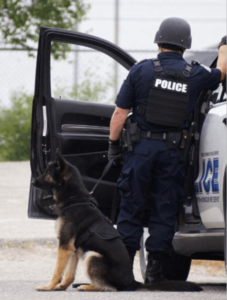 K-9 ‘Kizer’ was partnered with Cst. Kevin Sturgeon with the Newcastle Police Force and was absorbed as a K-9 Team with 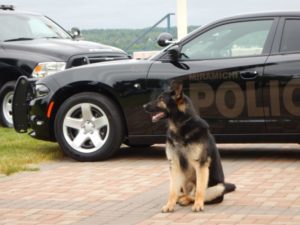 K-9 ‘Al’ and his handler, Sgt. Dana Hicks, were trained with the Ontario Provincial Police in the fall of 1999 and remained in service until 2006. Al was retired by his handler.

K-9 ‘Koala’ and her handler, Cpl. Lorri McEachern, were trained by the Ontario Provincial Police in 2000 and remained in service as a General Service dog as well as an Explosive Detection K-9 until the summer of 2008.  Koala was still operational when she passed away as a result of a medical condition at the age of 12.

K-9 ‘Chico’ was acquired from the Ontario Provincial Police in 2006 and was partnered with Cst. Andrew McFarlane until the fall of 2011 when Cst.  McFarlane left the K-9 section. Chico was able to continue his Police service as a narcotic detection dog with Cpl. Lorri McEachern until his retirement in 2013.

K-9 ‘Timo’ is a long haired, sable colored 75lb, female German Sheppard.  Timo was born in 2006 and was brought to Canada from a kennel in the Czech Republic by “Narnia Kennels” and purchased by the Ontario Provincial Police in November 2006.  Timo was subsequently purchased by the Miramichi Police in January 2007. Cpl. Lorri McEachern, who has been a K-9 Officer with the Miramichi Police Force since 2000, was partnered with Timo in the spring of 2007 when they attended the Ontario Provincial Police-General Service Dog Training.   Timo is in the process of being retired in the spring of 2017 by her handler, Cpl. McEachern. 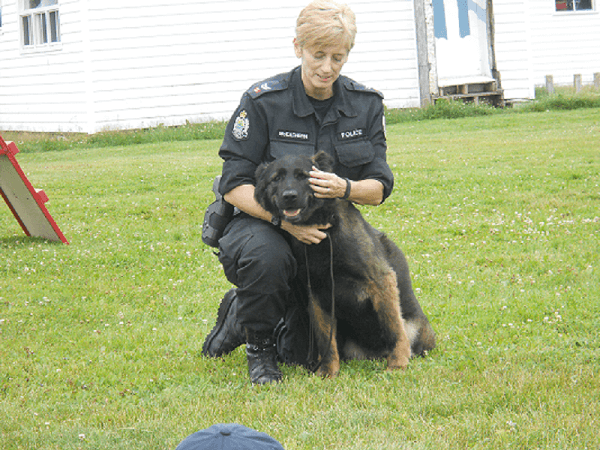